When we began our research programme in 2007, we knew carers play a crucial role in supporting patients, that this often affected carers’ own health, and that it was important to assess and address their support needs. However, it was not clear which aspects of support were most important to carers, how their support needs could be identified in a comprehensive, systematic way within everyday practice, and how to ensure support was person centred and tailored to their needs.

Research with carers and practitioners has since taught us what needed to go into CSNAT (the tool itself) to help identify carers’ support needs, how it should be used as a person-centred intervention (CSNAT-I), the benefits of CSNAT-I to carers, and what needs to be in place for successful implementation in practice. The sections below tell you more about each of these topics. 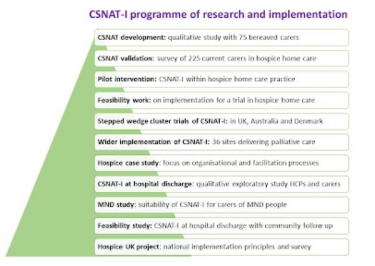 Developing and validating the CSNAT (the tool itself)

To develop the CSNAT (the tool itself) we asked carers to tell us what the important aspects of support were for them when caring for someone with a palliative illness. We first worked with 75 bereaved carers who could reflect back on their whole experience of caregiving. This helped identify a set of 14 key areas of support need (what we refer to as domains).

We validated these domains in a second study which surveyed 225 current carers about their support needs and other aspects of their caregiving experience. This showed the domains to be valid, relevant and comprehensive for end of life care. They became an evidence-based assessment tool for carers during end of life caregiving, the Carer Support Needs Assessment Tool (CSNAT) v2.0.

We were then asked if the CSNAT also covered the relevant domains of carer support needs for longer-term conditions. We explored this with 36 carers of people with MND/ ALS. Our colleagues also looked at the needs of carers for people with COPD. We found that the CSNAT worked well for longer-term conditions, but that these carers needed an added domain about the need for support with managing relationships. Consequently, we created a revised version, CSNAT v3.0 with 15 areas of support needs, suitable for all carers of people with chronic and progressive conditions, including cancer.

Through further work with services using the tool in practice, it became apparent that to benefit carers, the CSNAT needed to be used within a person-centred intervention which enables carers to consider, express and prioritise their support needs, and discuss these with a practitioner and gain tailored support. Dr Lynn Austin helped to develop what is now known as The CSNAT Intervention (CSNAT-I); a five-stage process of assessment and support for carers.

Several trials have shown the benefits to carers of using CSNAT-I within palliative care.

An Australian trial found that CSNAT-I led to reduced strain among carers during caregiving. Carers furthermore reported that using the intervention helped them express their needs and gain support, validation, reassurance and empowerment.

A Danish trial reported that CSNAT-I improved carers’ evaluation of support from practitioners, including attention to their wellbeing, quality of information and communication, and assistance in managing burdens. It also reduced carer distress.

An Australian trial also showed improved preparedness and reduced strain in carers of older people after discharge from hospital using an adapted version of CSNAT-I for hospital discharge.

A UK trial of carers of patients with stroke did not find that CSNAT-I made a difference, but found that CSNAT-I was not implemented as intended. This highlights the importance of ensuring the content and process of the intervention are fully understood and implemented in practice.

We realised that we needed to understand how CSNAT-I could be implemented successfully into routine practice across a range of care services. We did this in two ways: through our research studies and by providing CSNAT-I training workshops. We conducted a national implementation study with 36 palliative care services across the UK, and a smaller case study project with Ayrshire Hospice on their implementation experiences.

Diffin J, Ewing G, Harvey G, Grande G. The influence of context and practitioner attitudes on implementation of person-centred assessment and support for family carers within palliative care. Worldviews on Evidence Based Nursing. 2018;15(5):377-385.

We have also provided training and support sessions to over 830 practitioners from a wide range of services. The results from these projects and feedback from the training sessions have since informed the development of our CSNAT-I Training and Implementation Toolkit. Read more about this on the CSNAT-I Training for Practice page.

We have also developed 10 key organisational recommendations for implementing carer assessment and support in collaboration with Hospice UK. These are based on our implementation research and a large stakeholder consultation project. They provide the building blocks for embedding consistent carer support in any service context.